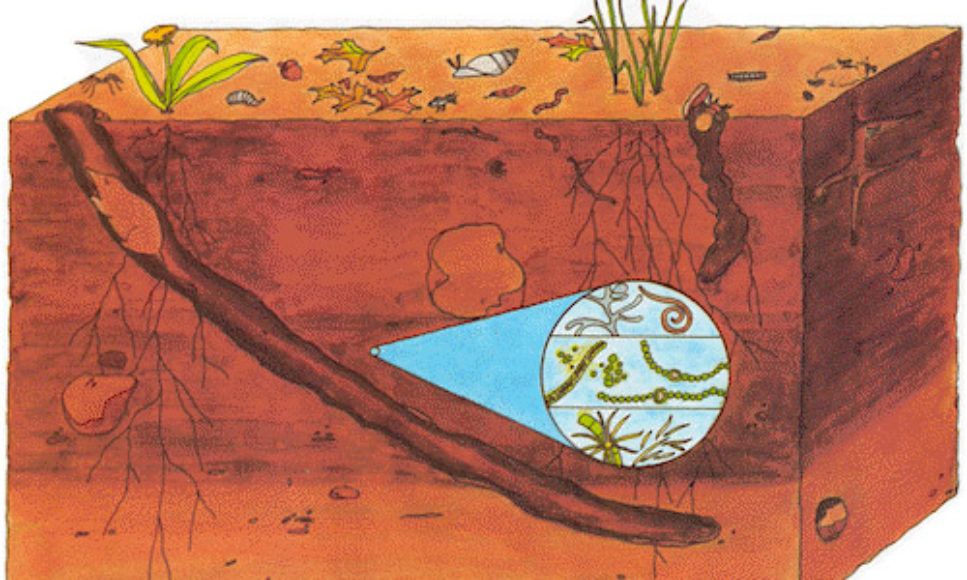 The soil beneath our feet is full of life. Plants and animals have important roles to play in soil. Both plants and animals change the composition and structure of soil in many different ways.

Plants with roots obtain nutrients and moisture from soil through their roots. The hard and durable root cap, located on the tip, protects the growing root. In the area immediately behind the root cap, cells are rapidly dividing to form new cells. This is called the region of cell division. Behind this area, cells elongate or grow longer. This is called the region of elongation. The combination of cell division and elongation creates great pressures that push the root through the soil. These pressures are often great enough to cause boulders to fracture if a root grows in a crack.

Roots get energy to grow from sugars that are made during photosynthesis – a process that occurs in the leaves. As the roots grow, they use oxygen from the surrounding pore spaces in the soil for respiration. The carbon dioxide given off reacts with soils water to form weak carbonic acid.

Roots absorb nutrients and water primarily through tiny projections called root hairs. This is called the region of absorption. Soil water places the root hairs in chemical  contact with nutrients that are on the surface of clay and humus particles. The weak carbonic acid clinging to the root hairs provides hydrogen ions to the soil water. The hydrogen ions then exchange with chemical  nutrients from the surfaces of soil particles. These nutrients, including ions of magnesium, calcium, sodium, potassium, phosphorous, and nitrogen are absorbed by root hairs. The chemical ion exchange, called nutrient exchange, occurs continuously around the roots.

Although plants are the most visible large organisms, many animals also inhabit soils. Earthworms are perhaps the best known of this group. Scientists estimate that between 200 and 1000 pounds of earthworms can be found in an acre of soil. Earthworms eat organic matter and any soil particles that get mixed in. They digest the organic matter and pass nutrient-enriched soil through their bodies. This recycles nutrients and makes soil richer. In addition, their tunnels allow air and water to penetrate the soil more rapidly. Earthworms like many other organisms, are vital to soils.

In addition to these plants and animals, billions of microscopic organisms, such as bacteria and algae, inhabit the soil. They along with fungi, earthworms, and other soil inhabitants play an important role in the decomposition of organic material. Decomposers help break down dead plant and animal tissue. Nutrients are returned to the soil, where they become available once again to plants.

The next time you stand on the soil, think about the billions of organisms at work beneath you. They are part of a cycle that returns valuable nutrients to the soil. Without these unseen creatures, the plants we depend on for food could not grow, and the life sustaining cycle on earth would be broken.

NUTRIENT CYCLE IMAGE IS ABOVE

Graphics and Text supplied by USDA NRCS Conserving Soils and USDA NRCS and NSTA Dig In!