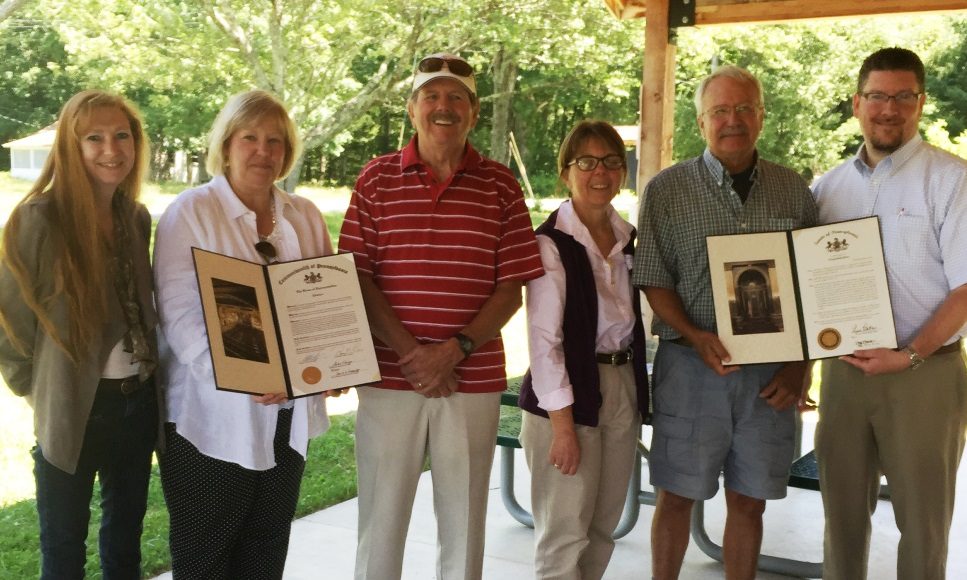 Pike County Conservation District Board of Directors celebrated the 60th Anniversary of the District in June! State Legislators, County Commissioners and cooperating agency partners joined District Board members and staff at a picnic hosted by the District on June 24, 2016 at Delaware State Forest at Lily Pond in Milford, PA. Tim Dugan, PA Bureau of Forestry District Forester, welcomed everyone to the Delaware State Forest Lily Pond site and provided an overview of the trails and state forest amenities.

PCCD Executive Director Sally Corrigan welcomed guests to the celebration and shared some highlights of the District’s 60-year history. Over the years, Sally has served the District in a number of capacities including serving as the first full-time District Manager in the 1980’s.

Early efforts of the District included working with our Conservation partner USDA Soil Conservation Service (SCS), now USDA NRCS (Natural Resource Conservation Service) to assist farmers and landowners with conservation planning, also assisting landowners with soil survey information and tree plantings. One of the District’s early objectives was sponsorship of a watershed project in the Greene-Dreher Watershed area following the devastation of the 1955 flood caused by Hurricane Diane.  This resulted in the building of several flood control dams in the western edge of the County – still maintained by Pike County.

The District operated until 1975 without paid staff. The volunteer-member Board of Directors coordinated District programs such as tree seedling sales, conservation poster contests at all local schools, aerial tours of conservation practices, and much more. In 1975, with the support of the County Commissioners the first part-time Executive Assistant was hired. In the 1980’s the District partnered with PA Department of Environmental Resources (now Environmental Protection) to accept responsibility for implementing the Erosion and Sediment Control program for DEP; the District still carries out responsibility for this program.  Today, the District has eight full-time staff who implement a full-range of conservation programs through policies developed by the District’s Board of Directors.

In recent years, the District has been instrumental in collecting data to protect our local waterways, has worked closely with the regulated community to incorporate environmental protections into projects within the county, and collaborated with many partners to provide educational opportunities to residents and visitors.

These combined efforts have contributed to protection of the county’s High Quality or Exceptional Value watersheds even while Pike County remained one of the fastest growing counties in Pennsylvania. The District plays a key role in the protection and conservation of both our surface and groundwater resources through education and monitoring efforts.

“We are blessed with great water resources here in Pike County and the Pike County Conservation District has played a key role in the protection of these resources. It’s a testament to the work of both our past and present Board of Directors and staff,” said Board Chairman Scott Savini.

Throughout its 60-year history, the Pike County Conservation District has worked closely with local and state government agencies, individuals, non-profits and many other organizations to protect the extraordinary natural resources of Pike County.  The District Board of Directors and Staff wish to thank the many past volunteers who have served on the District Board, our State and Federal Legislators, Pike County Commissioners, all of our cooperating agency partners, and Pike County residents for your past and continuing support of the District’s Conservation Program. It is only through your help and cooperation can we claim the successes we have had in these 60 years. THANK YOU!